Swiss 11 Staffel lead by their CO Major Daniel “Stampa” Staempfli was awarded the Silver Tiger during the end of NATO TIGER MEET 2008. It is the second time that the Staffel wins the Silver Tiger.

The Silver Tiger is awarded to the squadron that has the best overall performance / appearance during a NATO Tiger Meet. It is voted by a secret ballot system by all participating NATO Tiger Squadrons. Swiss 11 Staffel has been a Honorary member since the early eighties, and has been participating within the exercises since NTM 2003 at Cambrai.
They became FULL members to NTA since NTM 2004 at Schleswig and have been present ever since. They only could not fly in NTM 2005 at Balikesir because Switserland and Turkey have no agreement on such matters. Last year they were awarded the trophy for best painted aircraft, and this year the same aircraft received two newly and amazing painted wing tanks. For the winners of the other awards, please consult the NTM 2008 page on this website. 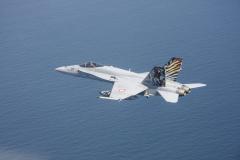