The TIGER is 75 years young 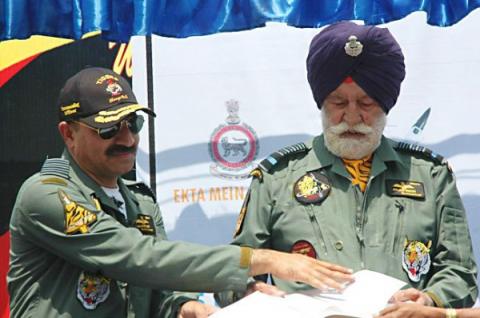 The first ever Squadron of IAF, No. 1 Squadron aka ‘The Tigers’ celebrated its platinum jubilee on 01 Apr 07 at Air Force Station Gwalior.
The No. 1 Squadron is the first squadron of IAF and was raised on 01 Apr 1933. The earliest history of IAF is synonymous with growth and advancement of 1 Squadron. The Squadron was formed with Wapiti aircraft and is presently operating the state of the art Mirage 2000s.
The Squadron has the distinction of taking part in 11 operations pre and post independence which includes major operations such as,

The Squadron is recipient of the prestigious President colour in 1968, which it got at hands of Dr Zakir Hussain.
On the occasion of its 75th anniversary the Squadron put up a ceremonial parade and fly-past at its base, Air Force Station Gwalior.
The Marshal of IAF Arjan Singh and The Chief of Air Staff, Air Chief Marshal Fali Major was also present on this occasion. Air Chief Marshal Fali Major unveilled and presented a Wapiti aircraft model to the Squadron. A Special day cover was released by the Marshal of IAF.