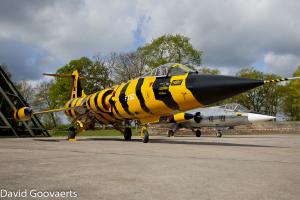 The famous 'Tiger' Starfighter will be on display during the NATO Tiger Meet spottersday on September 18, 2009

The FX-52 was the first aircraft from 31 squadron that received a full Tiger color scheme. This was done for the 1978 NATO Tiger Meet held at Kleine-Brogel airbase from on 19-26 June 1978.
Aviation enthusiasts Dirk Bellens and Henk de Jongh worked 3 years to restore the air-frame into static display condition.

The Starfighter is now appropriately stored in a Cold War era hardened aircraft shelter at Weeze airport (Germany). Weeze Airport once was an RAF airbase housing Canberras, Phantoms, Buccaneers, Jaguars, Tornado's, Harriers and Chinooks until it was closed in 1999. 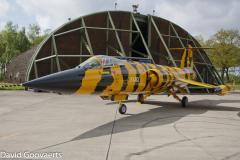