A giant flew away 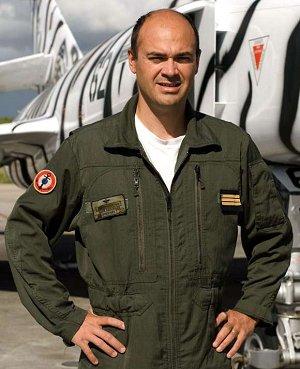 On October 1, two Super Etendard modernisés (SEM) from 11 F based in Landivisiau had collided above bay of Lannion, during a exercise. One of the pilots could have been helped quickly at the time of the rescue operation, a search to find the second, the lieutenant (LV) Sebastien Lhéritier, was abandoned, any hope to find him safe and sound having disappeared with the ticking of the clock.

On October 8, A religious and military service took place on the navy base Landivisiau to pay homage to the missing officer. Nearly 700 people gathered round the family of this pilot, of which the Minister for Defense, Herve Morin, the chief of staff of the national Navy, the admiral Pierre-François Forrissier, the maritime prefect, the admiral Anne-François de Saint-Salvy as well as elected officials of the area.

The Minister for Defense evoked the loss “of a giant pilot, a man impassioned with the unalterable motivation (…) who had put his passion and its engagement at the service of the nation.” “Naval aeronautics and the very whole Navy are struck with pain and of sorrow” the admiral Forrissier declared. “A giant flew away” He added. For a last good-bye with their brother in arms, five Super Standard flew over the navy base of Landivisiau.

Enlisted in 1992 in the national Navy, at the age of 20, the lieutenant Lhéritier obtains his fighter pilot's licence three years later. Assigned initially with the 17F then with the 11F at Landivisiau, he obtains the qualifications of flight leader, of chief of instruction, safety officer then of chief of the service operation of his unit in 2005. The LV Lhéritier took part in 61 combat missions, of which the last were carried out in Afghanistan. Holder of the “Croix de guerre des théâtres des opérations extérieures” and the “Croix de la valeur militaire”, He was awarded with the rank of Officer of the Legion of Honor on a posthumous basis.