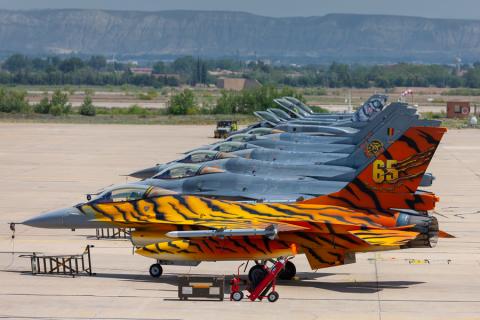 The first week of NATO Tiger Meet 2016 has flown by, full AB if you will.

The week ended with 2 public events, the Spotters day on Friday which gave 1500+ enthusiastic spotters the chance to take pictures of the Tiger aircraft during take-off, taxi and on the impressive Zaragaoza southern ramp, and collect the different patches produced by the participating Squadron's.

The airshow / open house enabled the local population, and aviation enthousiasts to enjoy a few hours on the base. this led to a visitor number estimated around 40.000. 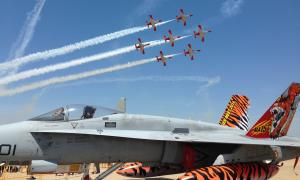 On Monday the display's made room again for operational flying by the Tigers.
The Detachments fly 2 sorties every day, the shadow wave (allowing for smaller packages to train specific tasks) in the morning and the main COMAO (where all fly as a single force) in the Afternoon, and they will keep up this rhythm until Thursday evening.

On Friday morning all start packing and returning to their home, or some even continue to another exercise somewhere in Europe.