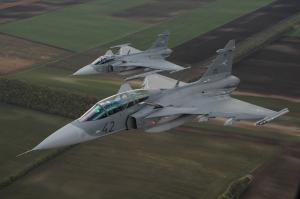 The Hungarian Air Force confirmed participation of 59/1 Puma Squadron for NTM 2009
It is the first time the Hungarian Air Force sends 3 Gripen aircraft to a NATO Tiger Meet.
Previously the 59/1 squadron send over 2 observers on a civil flight to NATO Tiger Meet 2001, also hosted at Kleine Brogel. At that time the unit was still operation the Mig-29.
Unfortunately we also have to announce the cancellation of Flotille 11F for NTM 2009. The unit is scheduled to go aboard the Carrier 'Charles De Gaulle' during the time-frame of NTM 2009